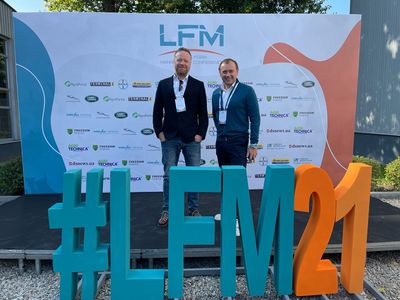 (DLG). This year, Agritechnica, the world’s largest trade fair for agricultural machinery, partnered again with the annual Large Farm Management Conference (LFM) held in Kyiv, Ukraine on 9 September 2021. In order to discover their machinery needs ahead of Agritechnica 2022, DLG’s Ukrainian Agritechnica team engaged with the 400 attending agribusiness professionals most of whom represented large-scale farming enterprises in Ukraine with an estimated total of three million hectares of arable land.

LFM traditionally precedes Agritechnica by a few months, which can help set the tone for an Agritechnica visit. The attendees to LFM often expect to equip themselves with information that will enable accurate investment decisions over the next year. In this context, Agritechnica may play a central role for these farm professionals allowing a close inspection and comparison of a range of machinery options for the future, as summarized by a large-scale agribusiness attendee: „IMC is always careful not to miss the Agritechnica exhibition, surely also not in 2022. I believe there is no better platform to get to know the latest technologies. For our large-scale farming enterprise, we are actively developing further our machinery range in terms of precision farming. At Agritechnica, my colleagues and I are interested in equipment for variable-rate seeding and fertilization that will allow us to save input material. We would also like to see equipment for seeding at high speeds at Agritechnica in 2022. That is for us the top priority,” said Oleksandr Verzhykhovskyi, Chief Operation Offcer of IMC, a stock-listed agricultural business company, farming on over 120,000 hectares, headquartered in Kyiv, Ukraine. The world’s leading trade fair for agricultural machinery, Agritechnica, once again was the international partner of the annual Large Farm Management Conference (LFM). The LFM Conference is organised by the Ukrainian Agri-Business Club and UCABevent Agency. The organizer of Agritechnica, the DLG (German Agricultural Society), has been cooperating with the Ukrainian Agri-Business Club, organiser of LFM, for more than 10 years with both organizations pursuing the joint objective of promoting the sharing of relevant agricultural knowledge in the agricultural sector.

“Since the DLG founded its subsidiary here in Ukraine, our relationship with large-scale agribusiness professionals has become even closer. This means that at Agritechnica in February 2022, we can match the needs of such Ukrainians visitors much more precisely. The topics and trends highlighted at the conference today gives us good guidance on the likely interest areas of these farmers at Agritechnica,” says Yulia Bondarenko, Managing Director, DLG Ukraine

Attending Agritechnca will be a representatives of the Ukrainian Agri-Business Club, which represents the interests of leading companies in the Ukrainian agro-food sector, promoting efficient agribusiness practices in Ukraine while supporting the improvements of agricultural policies in Ukraine. Members of Ukrainian Agri-Business Club include a long list of leading Agritechnica exhibitors.

Exhibitions for agriculture and food of DLG Group can be found: www.dlg-tradefairs.com

Agritechnica 2023: Exhibitor bookings now open
From 12 to 18 November 2023 in Hanover - Guiding theme "Green Productivity" - Registration now open ...
Strong performance of EuroTier and EnergyDecentral: Pioneering innovations enable transformation of livestock and energy
Over 1,800 exhibitors from 57 countries – more than 106,000 visitors from 141 countries - the world'...
Prospects for animal husbandry in Ukraine
Follow-up report on the Ukraine conference at EuroTier 2022 - European integration as a future goal ...
EuroTier 2022 supporting Ukrainian agriculture
International conference “The struggle for existence of Ukrainian livestock farming” on 16 November ...
Appeals for donations for Ukraine
DLG is deeply concerned by the war in Ukraine DLG condemns the war in Ukraine, which is a violation...